The last two posts introduced two separate concepts: calls and variables. The variables so far are global. We will now see that by applying lessons learned from procedure calls, variables can be made local!

What does it mean to have locally scoped variables, and why is that desirable?

Locally scoped variables are unaffected by procedure calls. This makes understanding a procedure easier, because there is sufficient isolation between it and the rest of the system.

It comes down to reasoning about effects.

You might already be familiar with the call stack from a few places. For example, if you have an unbounded recursive call, you will produce a stack overflow in most languages. This just means you have exceeded the maximum size of the call stack.

Another common place where the call stack is visible is when dealing with Exceptions, as it is very common for them to include a stack trace. A stack trace is just a visualization of the call stack. And since the call stack has return addresses, it is a log of how you got to your current location. 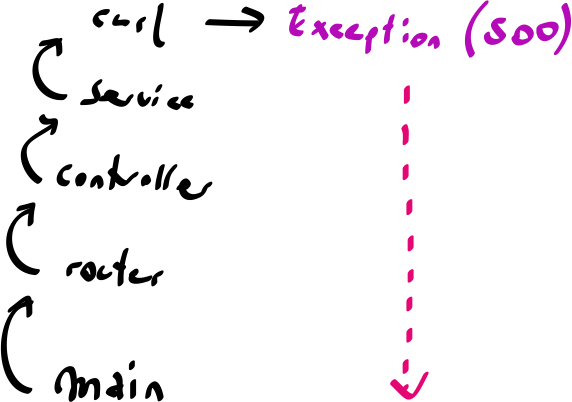 So far we have defined the execution context to just be $ip. But we can extend that definition.

In addition to $ip, it is possible to backup other parts of the execution context onto the call stack when performing a call, that can be restored later on. For example, the variables!

To group those values on the call stack, we put them into a box. That box is called a stack frame, and it looks like this: 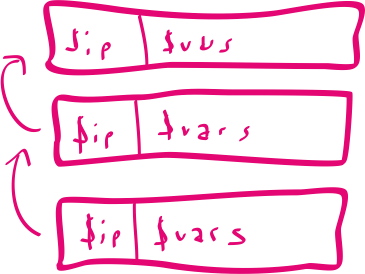 Implementation is simply a matter of adding $vars next to the instruction pointer on the call stack.

Backing up values when performing a call:

To prevent the called procedure from having access to the vars of its caller, it might be a good idea to reset them to an empty hash map as part of the call instruction:

Restoring values when returning from a call:

And here is an example program that verifies the locality of variables:

It prints 0, showing that the local store in foo had no effect on the main execution scope.

The call stack holds a trace of stack frames, which contain instruction pointers representing execution contexts, and all the state necessary to restore those contexts.