Since the original A successful Git branching model post from nvie there have been numerous attempts to simplify his model. While it is a very solid branching strategy, you do end up with a ton of branches that you may not actually need.

This post aims to document the general strategy that has been in use by a subset of the PHP community (and likely other communities too), and thus also plays nice with semantic versioning and composer.

Note: This model is intended for OSS projects. For products, I would recommend something like this. 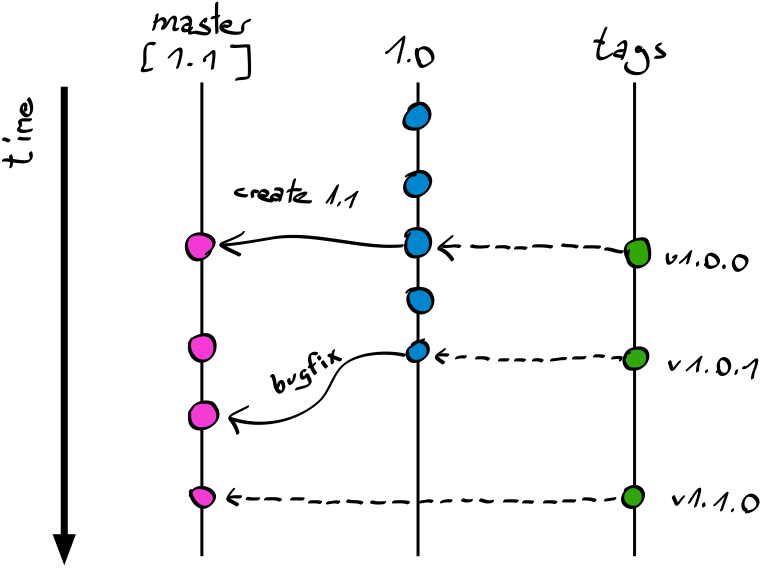 As defined by semantic versioning, versions are in the format MAJOR.MINOR.PATCH.

But “latest” can mean one of two things. Either it is the development of a yet unreleased version. Such as 1.1-dev which will eventually become v1.1.0. Or alternatively there could already be a release on 1.1, and this would be the development of the next release, such as v1.1.1.

Unlike nvie’s model, this one does not have a dedicated branch for releases, since the releases can be inferred from the tags.

In many cases there will be more than one branch active at the same time. Bugfixes should generally target the latest supported branch. For example, if the 1.0 branch is no longer being maintained, but 1.1 and 1.2 are active, then a bugfix should be applied to 1.1.

Because 1.2 is a downstream branch of 1.1 it will get those bugfixes as well. Just periodically merge 1.1 into 1.2 and all will be fine.

According to semantic versioning, new features should result in a new minor version. If the latest release is v1.0.5, then there should be a master branch representing 1.1. New features should be merged into master. Once v1.1.0 is released, 1.1 should be branched off of master, and master should become 1.2.

For smaller projects this rule can be relaxed and new features can be merged into a branch that already has releases. But keep in mind that it makes it harder for users to track which version introduced a particular feature.

A workflow for contributions is usually based on topic branches. Instead of committing to the particular version branch directly, a separate branch is made for a particular feature or bugfix where that change can be developed in isolation. When ready, that topic branch is then merged into the version branch. 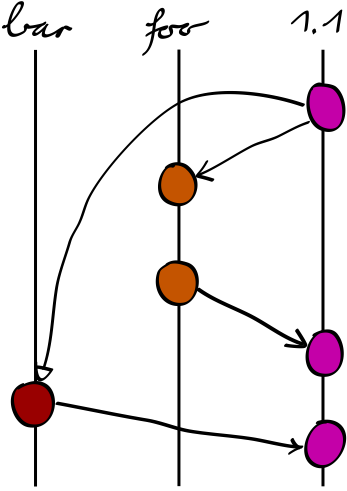 If a change spans more than one commit then this allows keeping track of what was merged when, and also allows it to be reverted in one go if needed.

More importantly, it allows new features to be prototyped independently without making a commitment to those changes.

Topic branches are usually very short-lived and are discarded after being merged.

This post really just documents the process that many of us have been using for our projects. If you have anything to add, please share it in the comments.