This series will explore design and implementation of virtual stack machines. That is, virtual machines whose operations are based on a stack. This post will cover the basics.

The stack, a data structure

So what is a stack? It’s a data structure with two operations: push and pop. You can push values on the stack, and pop them from the stack. This happens in LIFO (last in, first out) order.

This data type is fundamental to the design of a stack machine. Implementing a stack is quite easy, especially when you have an array that holds a list of discretely-sized cells and is index-addressable.

In addition to the array that is used for data storage, you will need to have a stack pointer. Which just points to the current head of the stack, and gets incremented and decremented as elements are pushed and popped.

Here is a basic implementation in C:

Many languages already have such a data structure built in. PHP has array_push and array_pop functions and an SplStack class. ECMAScript has push and pop methods on the array prototype.

In order to be actually useful, a stack machine also needs instructions. It needs to define an instruction set, and it needs a way to store and access those instructions. 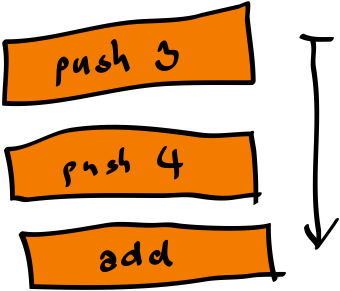 Instructions usually pop one or more values from the stack, do some computation, and push the result.

In the above example there are three instructions:

The machine executes them in sequence, reading the instructions one by one. Usually there is an instruction pointer (sometimes also called program counter) that points to the next instruction, and gets incremented after every operation.

The state of the stack changes during the execution of those steps. The final state should hopefully be something like this:

Usually, when the end of the instructions is reached, the value at the top of the stack is returned to the caller. In this case, the value 7 would be popped from the stack and returned.