The most common issue coming up in composer support at the moment is confusion about how stability is determined.

Usually it is a variant of this case:

When I require package A:dev-master, which depends on B:dev-master, composer tells me that package B was not found.

Composer puts the decision of how stable your dependencies are in the hands of the user. As a user, you decide if you want to use dev, beta or stable releases.

The basis of this decision is the minimum-stability field in the root package. It’s a root-only field. It defines a default value for stability flags and acts as a lower bound. 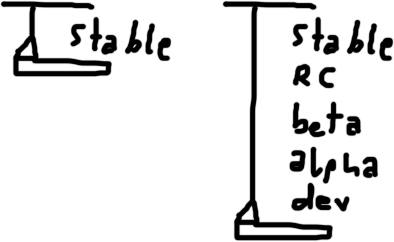 minimum-stability defines the default stability flag for all constraints.

So let’s think of a scenario where the root package requires package A:dev- master, which in turn requires B:dev-master.

At this point it will fail, because B:dev-master@stable does not resolve to anything. It will tell you that it cannot find a package B within the stability range you provided.

One way to fix the problem would be to just lower your minimum-stability down to “dev”. But that’s usually a really bad idea, because it applies to all constraints and as a result you will get unstable versions of all packages.

So please, don’t do that.

Instead, use stability flags.

A flag is defined as part of a version constraint. Since stability is determined by the root package only, flags are also root-only. Flags defined in dependent packages are simply ignored.

You can use flags to whitelist specific unstable packages. In this case I want to whitelist B. Here is how you do that:

Note that I did not define an actual version in the root package. This means that the root package does not care which version of B is installed, it delegates that decision to A, which has a more specific constraint.

The benefit is that if A decides to change its dependency on B from dev-master to ~1.0 or anything else, the root package will not need any changes.

To get a better idea of how this works in practice, let’s look at an example involving silex.

At the time of this writing there is no stable version of silex, which means in order to install it, you need to add a @dev flag:

All of the dependencies of silex have stable releases. Which means by default you will get v2.1.7 of a number of symfony components and v1.0.1 of pimple.

If you wanted to try the v2.2.0-RC1 version of those symfony components that was released a few days ago, you could whitelist them like this:

Since specifying all of those versions is kind of tedious, you could lower the minimum-stability. In this case that is okay, because it is not installing unstable packages that you do not want.

Some time after this post was written, composer got a new prefer-stable feature.

This is quite convenient and often will get you something good enough. But I would still encourage you to think more about which stability you really want, and declaring it explicitly. You may be trading convenience for control.

Hopefully this gives you a better understanding of how composer determines stability and how you can use stability flags to get those unstable versions.